I have not blogged in… well, ever. To get back on the blogging-thing I’m starting out with a five book wrap up. I’m really far behind with wrap-ups, but I gotta start somewhere. Anyway, off we go.

The Ice Palace by Tarjei Vesaas

This is a short little Norwegian book set in a little village somewhere. It’s about two young girls, Siss and Unn, who become best friends really quickly and then Unn disappears. Siss, who barely even knows Unn, falls to pieces. The village rallies to try and find Unn, and Siss’ old friends rally to try and bring Siss back to her old ways. It was so beautiful and weird and I really loved it. It felt really Norwegian, which makes sense, but I don’t know, certain Norwegian authors have a very distinct way of writing and I thought this was very that. I can’t really explain what I mean. The way Siss sort of crashes when Unn disappeared sounds like it would seem unlikely, because they just met each other, but they seem to have this relationship that makes that seem very realistic. They have a short, perfect, and beautiful friendship, and it’s so intense, so when Unn disappears Siss completely falls apart, which makes sense to me. I thought the way that Unn disappeared was so interesting, and that whole part was incredible, it’s so fairytale-esque, and so magical. It feels a lot like an old Norwegian folk tale, it isn’t, it just has that feel. I really liked it, and he is definitely a writer whose work I’d like to keep exploring.

I participated in #Middlemarchmadness which was hosted by Rincey at Rincey reads. It basically just means I read Middlemarch in the space of a month, August, and that was great. It was great to have something pushing me, even though technically it was imaginary. Anyway. This book is about a bunch of people living in a little plac 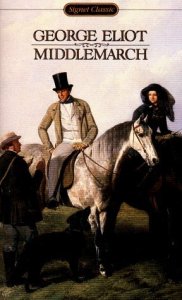 e called Middlemarch. The main character, I guess, is Dorothea Brooke. She lives with her younger sister Celia and her uncle. She marries a much older man, Edward Casaubon, and effectively traps herself in a loveless marriage. It’s about Casaubon’s nephew Will who falls in love with Dorothea, it’s about Celia who also marries, it’s about Fred Vincy, who is a sort of hapless young man who has trapped himself in debt and who has no way out, and he has to get out if he’s going to get to marry the woman he wants. It’s about his sister Rosamond who marries young doctor Lydgate, and their marriage sort of collapses in on itself. And a whole bunch of other people. The copy I read was about 830 pages. It was interesting, it was fascinating, but it was just so long, and I read it on my Kindle so I got no impression of how much I’d read. Gripe over. Nothing much really happens, it’s just this everyday story of people living their lives, which I liked. I don’t need a lot of action. I still feel like I got a bit bogged down though. There are so many people all the time. I feel like I happily would have read a book only about Dorothea, Casaubon and Will, or Lydgate and Rosamond. I liked it, but ultimately it felt a bit too long. It was a fun experience though. Maybe a shorter Eliot novel next time. Also I would have been really helped by a family tree, because I was confused a lot of the time about who people were and how they were related.

The Girl on the Train by Paula Hawkins

I read this because I joined a book club and this was our first pick. I probably wouldn’t have picked it up if not. Not because it’s bad, I just don’t really read crime and thriller novels. So this is about a woman named Rachel who takes the same train into London every day, and stops at the same place every day. And at that stop she sees the same couple at their porch hanging out. She’s seen them so often she’s made up a story of who they are. One day when she goes past she sees something unexpected and wrong, and is upset. The next day the woman goes missing. Rachel feels a responsibility to help. This thriller was very much character driven and there’s not really a lot of action, it’s a look into the head of Rachel and two other female protagonists. I hated everyone involved in the book, they’re all awful people. I’m really impressed at Hawkins’ ability to write thoroughly despicable characters. And she has a great ability to show you only what you need and revealing just a little at a time. I figured out who it was just a couple of pages before it was revealed, which was disappointing obviously, I should have figured it out earlier. I really enjoyed the experience of talking about it afterwards, it was really great.

This is a memoir, like it says, written by Jessica Valenti. It is about how she exists as a

woman in the world. And how existing in the world as a woman is. She talks about how she was sexualized from a young age and victimized, but how she never really thought to call it sexual assault, because it felt wrong to call it that. Jessica Valenti has also been subject to a lot of internet abuse and has been trolled quite a lot. Mostly because she’s a woman who talks about politics and feminism. The book gives you a look at how her inner life is a lot different from her tough, badass persona. She’s scared and vulnerable and worried she’s not doing enough. She talks about her drug use and how she was terrified of disappointing her parents by dropping out of college. She talks about her difficult pregnancy and her daughter’s difficult first years, and the family’s continued struggle with their daughter’s selective mutism, and how she and her husband really had to work to stay together. It’s so honest it’s almost painful sometimes. It’s so beautiful and Valenti feels so warm and strong, and she’s so willing to share, which was really wonderful.

his is a short story about a vampire named Carmilla. It is told from the perspective of Laura, a young English woman who lives with her father in a castle in the Austrian Empire. When Laura is 18 a carriage has an accident outside their gates and a girl of Laura’s age comes to live with Laura and her father while her mother goes somewhere, and is supposed to return in three months, because she can’t be delayed. Laura and Carmilla become close friends, but Laura starts having nightmares of a cat like creature biting her on the chest, and she starts getting sick and weak. Turns out, spoiler, Carmilla is a vampire and likes biting young women. It was fun. It was quite campy and at once wonderful and ridiculous and I liked it. It was lovely.

This is a text widget, which allows you to add text or HTML to your sidebar. You can use them to display text, links, images, HTML, or a combination of these. Edit them in the Widget section of the Customizer.